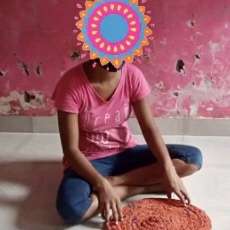 To explain the story of Kavita and her effort to pursue a dignified future, we have to start with the story of another woman, Komal.

Komal lives in Khadavali (W) in Thane district (Maharashtra) and has a five-year-old son. Due to the precarious situation in which she lives, she tried to have her son admitted to a shelter home that aims to help girls, boys and young people living in conditions of poverty and social exclusion, to achieve a better quality of life and future opportunities. Finally, Komal got her son into the center.

One day, while visiting her son, she found herself in a difficult situation. A young woman, whom she had already seen on several occasions, approached her to explain that she was being harassed and assaulted. Komal wanted to offer her help, but she didn’t know exactly what to do either. She contacted an NGO to explain the situation, through which the information of the case reached Mumbai Smiles. But after two days, Kavita escaped and asked Komal for help to take refuge in her house. She was very scared, her caretakers had beaten and threatened her.

Komal reassured her as much as she could and they went together to file a complaint with the police. It was at this time that Komal learned more about the story of Kavita, who had been at the center for three years after leaving her home in Jaunpur, Uttar Pradesh, in search of a better future.

But there was a big problem: Kavita’s documentation and the rest of her things were in the center, so the young woman had to return and she was returned to her custody. From that moment on, we have been following up on the case and the center. With a group of local organizations we decided to act and contact the Department of Child Welfare of the local government. An investigation was conducted and we were able to get Kavita out of the center with her documentation.

Kavita contacted a friend of hers, a former worker at the center, with whom she had confidence in her, and she went to live with her. Together they have opened a panipuri (a typical Indian snack) business that allows them to cover their expenses and support themselves.

This case highlights the importance for our RESCUE project team of networking both with the administration and with other organizations. Also the importance of guaranteeing the proper functioning of the centers and institutions that care for minors and young people. And finally, the importance of continuing to be in contact with these people in vulnerable situations to accompany them in the construction of a free and dignified future.

All names in this story are fictitious to protect the privacy and integrity of these people.