Mumbai Smiles is an NGO, founded in 2005 by the journalist and writer, Jaume Sanllorente, which focuses its action on the peaceful fight against poverty and for Human Rights in some of the most deprived areas of Asia such as India, Bangladesh and Nepal.

The eradication of human trafficking and transformative actions through an access to education, health and socioeconomic development are the main objectives of our projects, which allow the communities that lead them to achieve sustainable changes. From these actions, more than 10,000 people have already benefited and to which we can add more than 22,000, during specific emergency actions.

With the aim of addressing the social problem of trafficking, from supporting its victims through prevention, rescue and rehabilitation, the Foundation works together with the most disadvantaged communities so that they can achieve a dignified, free life and with full of opportunities for the future. 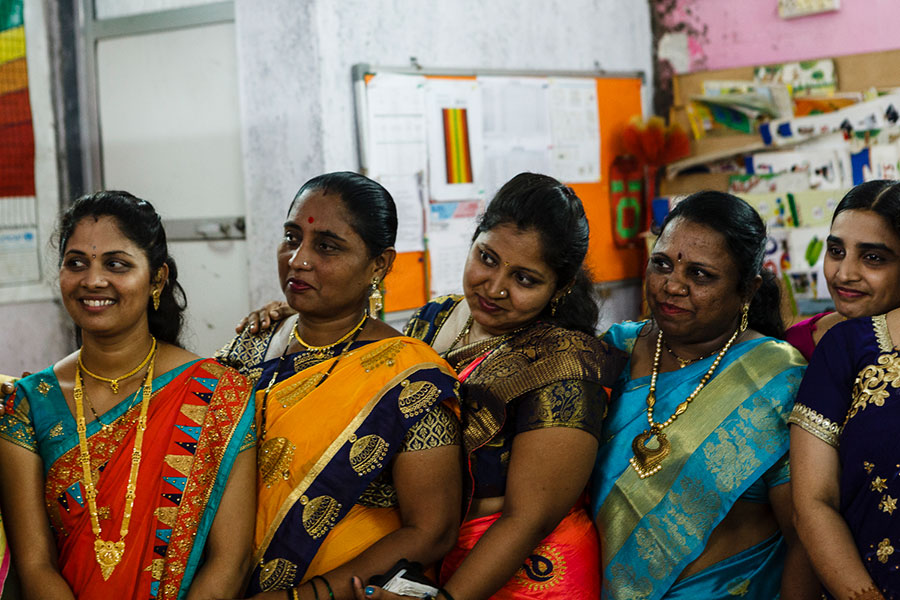 Transform the reality of people vulnerable to trafficking, as well as their families, to promote the empowerment of communities, thus achieving sustainable changes.

A world free of poverty in which all people enjoy freedom, Human Rights and a dignified life.

Our development work is aimed at promoting fair access to opportunities and the full exercise of Universal human freedom.

We respect human diversity in all its forms, regardless of origin, nationality, caste, age, political or sexual orientation, religion or gender.

We manage our resources rigorously, relying on transparency and accountability towards our partners, collaborators, donors, beneficiaries, and society in general.

Our work is based on doing what we believe and say, being faithful to the achievement of our Mission and Vision. Our work speaks for itself.

Committed to our Mission, we take the responsibility of working towards its achievement.

We intend to join efforts promoting teamwork and collaboration with other organisations and institutions to enhance synergies and improve the performance of our work.

To induce a real social transformation, we promote participatory mechanisms, integrating the implementation of the projects with all stakeholders.

Motivated by the results of our efforts, we carry our work with hope, enthusiasm, passion and interest.

Thus, in addition to the poorer neighbourhoods of Mumbai and the surrounding rural areas, we work in three other parts of India, such as Kolkata, Goa and Pudicherry.

Mumbai Smiles also works in Nepal and Bangladesh, countries that share a border with India and are points of origin for many of the victims of human trafficking, who end up being exploited in Mumbai and other Indian cities. From these countries we work to prevent and avoid trafficking, raising awareness in communities and strengthening the most vulnerable people, the potential victims of this problem.

Mumbai Smiles was founded in 2005 by the journalist and writer Jaume Sanllorente, after learning, on a holiday, the situation of an orphanage in Mumbai with serious financial problems. The closure of the orphanage would have forced more than 40 boys and girls to live on street with the certainty of them ending up as victims of Human trafficking and exploitation networks.

With the commitment to resolve this situation, he began what he calls a “peaceful fight against poverty, a struggle that nowadays has been endorsed by a growing team of people dedicated professionally, voluntarily or as partners and collaborating partners and donors to this project for the protection of Human Rights.

This commitment to the most disadvantaged communities has involved a transformation process in favour of the sustainability not only of the areas in which it works but also of the actions promoted. In 2018, the foundation decided to focus an important part of its efforts in the Kamathipura neighbourhood, the red light area of Mumbai and one of the main prostitution areas in all of Asia. This commitment has led Mumbai Smiles to focus its actions on the fight against Human trafficking and to expand its radius of activity to other areas of India such as, Nepal and Bangladesh, with the aim of promoting the eradication of Human trafficking through prevention, rescue and rehabilitation, to support people who suffer the consequences.

In 2020 the organisation took the legacy of the JAL association, the Leprosy Action Board, and its projects in South India. As a result of this merger with the organisation, led by Dr. Montse Pérez, a dermatologist and marathoner for more than 55 years, we will continue increasing efforts that will allow us to continue transforming futures.

During these years the NGO has received awards such as the 4th Edition Tarannà Responsible Award; the DKV Seguros Medicine and Solidarity Award (2nd Edition); the Blas Infante Award, Casares Solidario, 12th Edition; the Engaged Optimists Award from the magazine “Anoche tuve un sueño” (1st Edition); the Cuida de Ti Award from MIA and Garnier (ex aequeo, 3rd Eition); the Award for Coexistence of the Autonomous City of Ceuta; the Blogs Cataluña Award in its 2nd Edition; the T de Telva Award for Solidarity; the Natura Prize; the 13th Tierno Galvánam Award for Solidarity and Human Values, and the 2007 Axuda Award.