The face of human trafficking

The faces of human trafficking: courageous women who stand up

We want to talk to you about the brave women who stand up against human trafficking.

We are going to talk about Meena, Jaya, Shakti and Mira, but there could be many others. All with a common story: trafficking and sexual exploitation. Hard lives, very hard, from which they try to escape with lesser or greater luck.

At Mumbai Smiles we work daily to rescue women in the same situation. To prevent that many others are and to reintegrate into society those who have managed to break the chains of trafficking.

We want a very different common denominator for them: that of FREEDOM, a DIGNIFIED and SAFE LIFE.

You too can stand up for them and help us advance our goal: collaborate so that 20 women can be rescued from trafficking and sexual exploitation. 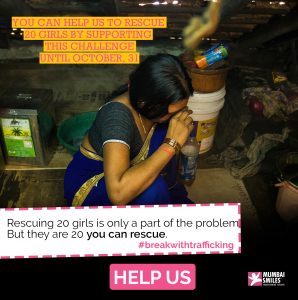 At Mumbai Smiles, almost every week we receive notices to rescue girls who are being sexually exploited in inhumane conditions. They are girls between 20 and 25 years old, but many of them are also minors. They are captured, deceived and sometimes even kidnapped by mafia networks, which transfer them to Bombay, where they are forced to work as prostitutes in unacceptable conditions of slavery.

These women are forced to have sex with up to 11 clients a day, in rooms and spaces without the slightest hygienic conditions, and live under the constant threat of pimps. They suffer abuse, verbal and physical violence, humiliation, and to cope with their situation they often have no other way out than to take refuge in alcohol or other substances.

For a year now, at Mumbai Smiles we have a team dedicated to rescuing victims of human trafficking and sexual exploitation, in coordination with the local police and other agencies and we have already managed to help a total of 13 women. But these ransom demands are becoming more and more, in a city where it is estimated that there are 4,00,000 women trafficked and sexually exploited, of which 1,80,000 are minors.

All these images are part of the traveling photographic exhibition “The faces of trafficking”, which is currently in La Coruña, at the train station until October 21.