Sarojini Naidu and Her Story

Sarojini was a poet and activist during the struggle of India’s independence, nicknamed “The nightingale of India.” She was one of the leading freedom fighters of women’s rights in the Asian subcontinent in which we work, and considered to be one of the best poets of the time. She is an important figure in the culture of this country, she being the first governor of the United Provinces of Agra and Oudh between 1947 and 1949. She was also the first Indian woman to be president of the Indian National Congress.

Sarojini was born on February 13, 1879 in Hyderabad. She was the eldest daughter of Barada Sundari devi , a poet who used to write in Bengali, and Aghorenath Chattopadhyay, a Bengali Brahmin, doctor of science, director of Nizam’s College in Hyderabad and political activist. The little girl had a precocious intelligence and at only 12, she was accepted at the University of Madras and was already publishing her first book of poems in Persian “Maher Munveer”, which made an impression by its beauty. 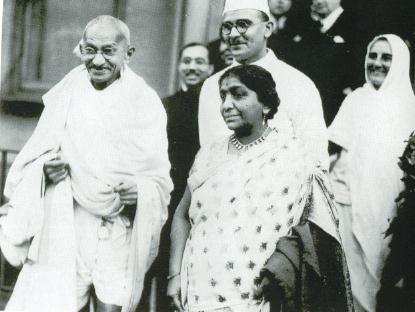 At the age of 16, in 1895, she went to London to study with a scholarship for 3 years at King’s College, and then at the University of Cambridge. Sarojini studied different languages ​​at the same time and wrote poems. In England she met her life partner and at the age of nineteen she married to Dr. Govindarajulu Naidu, despite being of a different caste from hers, which was considered not less than a crime in her native India. But Sarojini’s parents accepted her daughter’s marriage without any problem.

Sarojini inherited from her father an interest in social movements, the causes of the most unstable situation in India, and in 1905 she had already joined the Indian national movement. That same year she successfully published a first edition of poems: “The Golden Threshold”, which was distinguished by its verses and writing.

After some experience in the suffrage campaign in England, she returned to India. In 1915 she began a long three-year journey across India, giving conferences in favor of social assistance to the most needy and the emancipation of women in an India anchored in the past.

In 1917 she founded the Indian Women’s Association (WIA), an entity that sought the right to vote and hold legislative positions. In 1919, Sarojini joined the movement organized and led by Mahatma Gandhi. She also met Gopal Krishna Gokhale, a liberal political leader, who asked her to use her poetry to reinvigorate the passion for independence among the masses.

She travelled through East Africa and South Africa in the interests of the Indians settled there, and in 1925 she was elected as a president of the Indian National Congress, being the first Indian woman to hold the position. She also travelled across the US giving speeches about the Congress movement. In 1931 she accompanied Mahatma Gandhi to London for the second session of the Round Table for India-Great Britain cooperation.

Her activity and her leadership in the peaceful revolution caused her several prison terms (1930, 1932, and 1942-1943). She continued to defend the independence of India until achieving it in 1947.

After independence, she was elected as a governor of the Provinces of Agra and Oudh, which today are part of the state of Uttar Pradesh, she was the first woman to obtain such a position.

She continued writing and working until her death on March 2, 1949 from a cardiac arrest in her office. The eldest of her five children, Padmaja, followed her steps and published her posthumous work “The Feather of the Dawn” in 1961.

Sarojini Naidu was one of the best lyric poets of the time by writing in English and she made an immense contribution to the freedom of her people, nation and of the Indian woman.