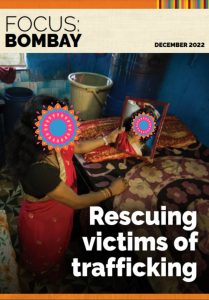 Let’s talk about the rescue of victims of trafficking

One of Mumbai Smiles’ priority project is the fight against human trafficking. This, together with arms and drugs, is one of the three illegal industries that generate the most profits: during the last decade, the three moved 650,000 million dollars annually (about 595,000 million euros), which is equivalent to 1.5 % of world GDP.

There are more prostitutes in Bombay than in any other Indian city, and some studies reveal that one in seven is a slave.

According to estimates of a rather restrained nature published by NGOs, sex trafficking in Mumbai exploits FOCUS: MUMBAI 4 DECEMBER 2022 approximately 400,000 people, including 180,000 girls. Police estimate that there are about 35,000 Nepalese citizens in Mumbai’s prostitution zones, although social activists insist the true number is closer to 100,000, most of whom are minors. The Kamathipura slum in Mumbai is considered the largest prostitution zone in Asia, with some 5,000 sex workers.

Beyond prevention: the rescue

At Mumbai Smiles, in addition to the projects focused on the prevention of human trafficking and the rehabilitation of survivors, we have created a Rescue department whose main objective is to rescue the victims of their exploiters. With this objective in mind, a team of four people has been created. This group has the mission of coordinating and joining efforts with officials, police, authorities and other similar organizations for the location and rescue of women and girls who are sexually exploited. Each rescue case differs from the rest, but the same steps are followed in the process.

We invite you to read this publication in order to learn more about how this team works and its main achievements and challenges.

We also encourage you to participate by supporting the #breakwithtrafficking campaign, which allows us to continue expanding the number of rescued people who become safe and have the option of a dignified life.