Know the story of Meena, in Madrid 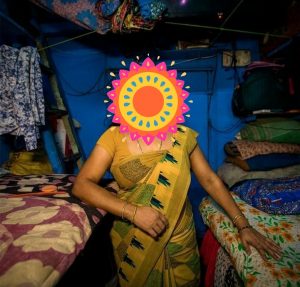 For the safety purposes, we are hiding their faces in India and will be shown only in Madrid during the exhibition.

Meena was born in Murshidabad (Kolkata). Her parents and her five brothers and sisters lived in dire financial straits. Her mother was always sick, and neither she nor her siblings could go to school because they had no money. At 13, a friend of her father told her that he was offering to take Meena to Gujarat to do housework so she could send some money back home each month. Her father thought it was a good idea. But her friend did not take Meena to Gujarat. He sold it at Pila House, a brothel in Khetwadi, Bombay, for 10,000 rupees (about 120 euros). Meena had to engage in forced prostitution for 20 years. She was kept locked in a kind of cell, where she was given injections so that she was asleep most of the day. Those injections also disfigured her body. If she resisted her, they would hit her hard. They even made cigarette marks on her body. She tried several times to get out of the cell where she was being held, but she was unsuccessful. At the age of 17, she gave birth to a boy. She later had a girl. Now Meena lives in the Khetwadi brothel with her son and her partner, while her daughter lives in the foster home of the local NGO Perana. Her son is in the 10th grade and is a beneficiary in the Mumbai Smiles Access to Education project.

This is one of the stories that shape the exhibition “The Faces of Human Trafficking” that we will present in Madrid starting tomorrow, Tuesday, May 24. It will be at the Madrid Puerta de Atocha Station and can be visited until June 6. A photographic exhibition in which from Mumbai Smiles we want to show the real faces of human trafficking, from the perspective of the courage and dignity of those who suffer it in the first person.

For the women protagonists of these portraits, women from the Bombay communities with whom we work, the social stigma that weighs on them is a burden. For this reason, trafficked women are usually not allowed to show their faces. If they did, they would be doomed to further abuse and exploitation. The value of this exhibition lies precisely in the fact that these women, by showing their faces, are taking a key step to look forward and denounce their situation.

The photographic exhibition “The faces of Human trafficking” will tour the Spanish geography during this year 2022. After passing through Barcelona, it now arrives in Madrid, where it will remain until June 6 before continuing in other cities such as A Coruña, Valencia or Bilbao. Admission is free and there is a guide that is accessed from QR codes, on the exhibition panels, to follow the contents of the portraits.

We want to thank a Adif the free transfer of this space through its Open Station Program, and to the Indian photographer Abeer Khan for making this project possible with her valuable photographs.

All the information about this exhibition can be found in this dossier.

¡We are waiting for you!