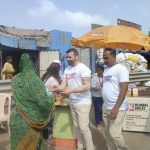 The second most populous country in the world is experiencing a real heat wave that is testing the limits. During April and March, India reached the highest average temperature recorded in the last 122 years. And the first weeks of the month of May that we are experiencing, have begun with temperatures above 45 degrees.

This temperature situation linked to climate change once again gives us a loud and clear warning of where we are taking the planet, and without going any further, India continues to depend on coal to generate around 70% of its electricity, fuel that contributes most to climate change.

But beyond the medium and long term in relation to the consequences of the heat wave, there are already immediate consequences: an increase in deaths, diseases related to the lack of drinking water, power outages, fires that will continue unless the monsoon rains and storms mitigate it. That is why at Mumbai Smiles we have decided to promote actions that respond to immediate needs of the citizens regarding these consequences, which are added to the actions to promote access to drinking water, which were already underway. 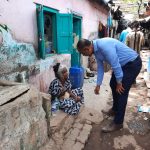 As of today, different actions have been started, such as: monitoring of the proper functioning of drinking water access systems; water distribution (with a parenthesis in the use of plastics); distribution of electrolytes and caps for several days at strategic points in the city; distribution of information and psychological support to families in the communities with which we work; and contact with the hospitals with which we work to learn about their situation regarding this exceptional context.

We will continue updating you on the progress of the situation and these actions in the coming days.