Anandi Gopalrao Joshi was one of the first Indian doctors and an example of determination.

In fact, she was the first Indian woman to study and graduate with a two-year degree in Western medicine in the United States. She is a world leader in the fight for women’s rights and against the difficulties that nineteenth-century Indian society caused women, hindering their access to health studies.

She was born on March 31, 1865 in Kalyan, Maharashtra state, into a wealthy Hindu Brahmin family and her name was Yamuna. Due to tradition, she was married as a child, at the age of 9, to a widower 20 years older than her, named Gopalrao Joshi, who worked as a postal worker. After her marriage, she was named as Yamuna by her husband as a tradiction.

Gopalrao Joshi was progressive-minded, unusual at that time and he strongly supported the education of women. He taught his wife to read and speak English. At the age of 14, Anandi gave birth to her first child, but the child survived only 10 days. This tragedy was the one that inspired her medical vocation and prompted her to want to study medicine. 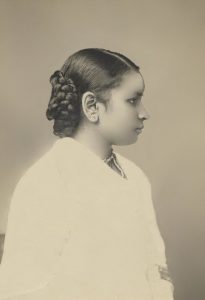 Her husband tried to get her admitted to numerous universities in the United States, but most of them demanded that Anandi converts to Christianity. However, one woman, Theodicia Carpenter of Roselle, New Jersey, learned her story which was published in the ‘Missionary Review’ magazine and decided to help her. Anandi began to consider Mrs. Carpenter as her aunt and the exchange of letters was also an interesting way to discuss many topics such as early marriages, women’s health, the Hindu religion and the situation of women in the country, India.

Unfortunately, Anandi’ s health didn’t always support her and she frequently used to suffer from fever and weakness to the point, that Mrs. Carpenter herself sent her medicines from the United States.

In 1883, at the age of 18, her husband Gopalrao was assigned to Serampore, West Bengal and this led the couple to accept Mrs. Carpenter’s generous offer to host Anandi in the United States to study. This decision, however, was condemned in Hindu society, the couple suffered harassment and threats with stones and manure thrown at their doorstep.

Yet Anandi pursued her dreams and explained her dream of opening a women’s medical school in India upon returning from the United States. She too assured that she would not forget her Hindu Brahmin roots. Her speech at Serampore College was so important that it was broadcast in different forums and as a result, she received financial contributions from all over India, including from the viceroy of the British colony. She travelled to the United States accompanied by two American missionaries and Mrs. Carpenter welcomed her as if she was her daughter.

Anandi wrote to the Medical College of Pennsylvania (which runs the second medical program for women in the world) and applied for her admission, an excerpt from the letter she wrote to the University read as follows:

“The determination that you have brought me to your country against the opposition of my friends and my caste should be of great help to carry out the purpose for which I came, that is, to render true medical care to the women of my poor country which they unfortunately need, since at present they prefer to die rather than accept it at the hands of a male doctor. My soul would move to help many who cannot help themselves.”

The University accepted her by offering her a scholarship and Anandi began her medical education at the age of 19 despite her poor and fainting health, high fever and cough, which began to reoccur very often. She obtained her medical degree on 11th March 1886. She was India’s first female doctor. Queen Victoria sent her a message of congratulations on her achievement.

When she was in United States she was diagnosed with tuberculosis but she returned to India. The return trip was very difficult and worsened her health situation as the ship’s doctors refused to treat a “dark” woman.

Anandi came home in late 1886 as a hero. The state of Kolhapur appointed her Lady Doctor in charge of the women’s ward at Albert Edward Hospital. But in India her illness did not receive adequate treatment either. Even a renowned Ayurvedic specialist refused to treat her and accused her for crossing the limits of the society to which she belonged. Anandi Gopalrao Joshi passed away on February 26, 1887, just before her 22nd birthday.

Due to her early death Dr. Anandi was barely able to put her medical training into practice but she made a great contribution to India by fighting social norms and becoming a doctor. Today, she continues to be an inspiration to all young women in India, who achieve her dreams with determination and stamina.