On a rainy cool evening of 19th July, 8 LSE beneficiaries of Mumbai Smiles and a bunch of volunteers from the Rotaract Club of Churchgate clubbed together to celebrate International Nelson Mandela Day through a simple yet very effective campaign of spreading happiness and joyfulness among the people of Mumbai. The Campaign is called as “Spread a Smile Campaign”. 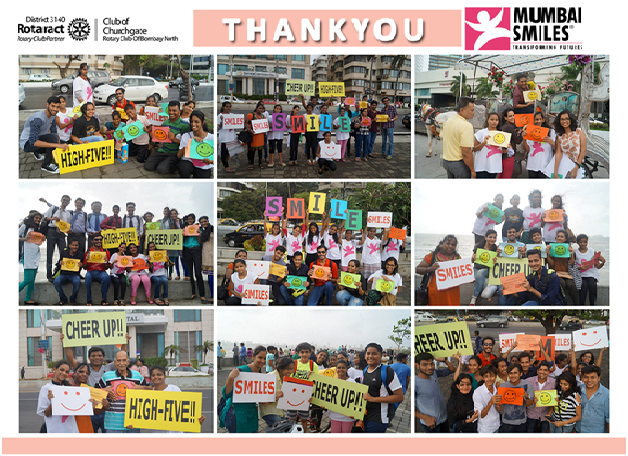 The 18th of July is more than a celebration of Nelson Mandela’s life and legacy. It’s a global movement to honour his life’s work and act to change the world for the better. Hence it was for this very purpose that Mumbai Smiles collaborated with the Rotaract club of Churchgate to spread awareness about the importance of promoting human rights and what better way than observing the life example of Nelson Mandela. He gave 67 years of his life to the struggle for human rights and social justice. Being a leader who acted with a steadfast belief in justice and human equality believed that it is in our hands to create a better world for all who live in it, and what better way to promote his thoughts by reminding the people that a smile has the power to change the world, enhance your business and build better and faster relationships.

This day was celebrated by distributing colourful pamphlets among random people present on that evening in Marine Drive. These pamphlets contained the message, “You’re never fully dressed without a smile”. It was a message that encouraged people to put behind their worries and sorrows and take each day as an opportunity to be joyful and spread that happiness around. Along with the colourful sheets of paper, big sign boards that read “cheer-up, high-five, smile” etc were also displayed as the volunteers walked on the streets. The people watching these signboards would inevitably have a smile on their face and were curious to know more about the campaign. Many of them came forward to participate by holding these boards and promoting it themselves.

The Rotaract Club volunteers also distributed free coupons of eating joints and vouchers of salons for the people. This was another reason for the people to be happy and interested in the campaign. The volunteers made people sing songs, express a few words of joy, take photographs and share with everyone the thing that makes them smile.

The campaign brought an unexpected result. The outcome was tremendous as in a span of just 2 hours more than 200 people were made aware of the campaign and thus the true objective and aim of the campaign was achieved, which was ‘spreading smiles’.

On hearing the feedback from the people with whom we interacted that evening, the team realized that many appreciated the campaign and expressed their desire that more of such campaigns should be organized to alleviate the stress and anxiety that many face today in this city.