Mumbai Smiles considers education as the key to success and progress, therefore we prioritize it when coming up with ideas of how to improve the life of the youth in India with difficult economic backgrounds. “Smiling Schools” was a project we decided to take on due to the fact that we wanted to establish lines of communication between the students in Mumbai and the students in Spain, in order for them both to get a better understanding of what life is like for the other. We hoped that this would make the students (particularly the ones in Spain) more sensitive to the issues regarding the underprivileged youth in India and it would help the students get more exposure to what the lifestyle is like in both places. The schools that wanted to be involved were Samta Vidyamandir and St. Rocks High School in Mumbai and Institut Fort Pius and INS Estatut in Rubí, Spain. 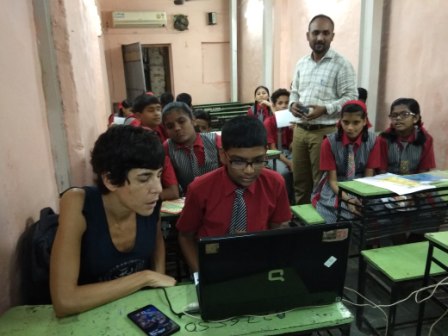 Once we had established that, we set a game plan. We split the students into 4 groups per country; two per each school, one from grades 7-8, and the other from grades 8-9. Then we paired each group up with a group of the same age in the other country. We also wanted to use a range of communication methods so that the students could get to know each other in various different ways and, finally, we decided on four different interactions. The first one was an orientation, directed by Silvia and Pari, two members of the Mumbai Smiles team, where the students were explained the concept and the objectives of “Smiling Schools” and introduced the exposure the kids were going to get from abroad. The second mean through which the students communicated was handwritten letters and, finally, a Skype session was held where the students got to interact face to face and discuss the letters as well as ask any questions.

We are pleased to say the project was a success! The students established amazing connections with each other and learned a lot from one another!

For more information on how each of the meetings went, which were most successful and what changes we saw in all the students, stay tuned, as we will post more about the project in the coming weeks!